KUALA LUMPUR: Malaysians for Free and Fair Elections (MAFREL) has started recruiting volunteers to help it observe the Kajang by-election.
MAFREL chairman Syed Ibrahim Syed Noh told a press conference today that his group would observe polling at all 15 voting centres and planned to deploy between 25 and 30 volunteers to serve as static and mobile observers.

He invited interested members of the public to register as volunteers by contacting MAFREL official Arphan Ahmad by telephone (012-2731016) or email (arphanahmad@gmail.com ).

He said MAFREL would monitor “all aspects of the election process” from nomination day to polling day, focusing closely on the following:

Corrupt practices such as vote buying and abuse of public resources;

The level of security provided by police and other authorities;

Incidents of violent and dangerous acts such as the use of hate speech and racist campaigning.

Syed Ibrahim criticised “certain political parties” for embarking on their campaigns before nomination day, which is tomorrow.

He urged the Election Commission (EC) as well as the police to be impartial in performing their duties.

He also suggested that the EC dispense with indelible ink if it “cannot guarantee that the fiasco of the 13th general election will not be repeated”.

MAFREL was formed in 2003 and has observed three general elections in Malaysia. It has also observed elections in the Philippines, Bangladesh and Afghanistan.

The Kajang state seat fell vacant with the resignation of assemblymen Lee Chin Cheh of PKR on Jan 27. Polling day is March 23.
Posted by AHLI MAFREL at 9:49 PM No comments:

We would like to invite you for a BERSIH 2.0 Endorsing NGO Meeting, which will be held on:

This NGO meeting will discuss important issues on the future direction of BERSIH 2.0, and the upcoming Steering Committee elections.

We hope very much that all of you will attend this meeting.

1. Update on the People's Tribunal

The PEMANTAU report launch will be held on:

Please help to spread information on the PEMANTAU Report launch! We would appreciate greatly any help with mobilising people to attend the launch, especially if they were involved in BERSIH 2.0 events and the PEMANTAU initiative.

Please confirm your attendance with Mandeep. If you have any inquiries, please call 03-7772 3275.

For state coordinators who will be coming from out of KL,please contact me for flight booking and accommodation.

Posted by AHLI MAFREL at 1:14 AM No comments:

For MAFREL ELECTION OBSERVERS, REGISTER AS WELL AND SEND EMAILS TO MAFREL STATE COORDINATORS AS FOLLOWS

Posted by AHLI MAFREL at 6:49 AM No comments:

KUALA LUMPUR: INVESTIGATORS probing into the financial background of several non-governmental organisations have uncovered attempts by foreign hands to destabilise the government.
Sources revealed that from 2005 to 2011, almost RM20 million, courtesy of the Washington- based National Endowment for Democracy (NED) had allegedly been channelled to: SuaRaM (RM1.6 million);

From last year, several other set-ups, namely Bersih, Merdeka Center for Opinion Research, Lawyers for Liberty, Liberal Banter Sdn Bhd as well as the International Republican Institute, began receiving funds from NED, an organisation that had been claimed to have “played a significant role in attempting to destabilise legitimate governments and replace them with client proxies”.

NED, on its website, said "it is a private, non-profit foundation dedicated to the growth and strengthening of democratic institutions around the world".

It also claims to be a unique institution where it could provide "flexibility that makes it possible to work in some of the most difficult circumstances, and to respond quickly when there is an opportunity for political change".

It is believed that organisations with "programmes consistent with its objectives" are awarded grants.

Sources also revealed that Suaram, which is under several investigations, including for allegedly raising funds while operating as an unregistered society as well as for serious violations of at least five sections of the Companies Act, along with Suaram and Suara Inisiatif Sdn Bhd the company that is linked to it, had four known foreign funders.

It was reported that the embassy had admitted that it funded Suaram's project that particular year.
Another RM34,000 was also allegedly channelled to Suaram by Seacem.

The links of these establishments are apparent, with Seacem on its website acknowledging that it was supported by OSI.

He had also asked the Home Ministry and Registrar of Societies to determine Suaram's status.
Many quarters have questioned the need to have outside influence interfering in the country's political agenda.

They have also called on several key opposition figures including Parti Keadilan Rakyat's Tian Chua, Suaram director Kua Kia Soong and co-founder R. Sivarasa to explain why Suaram was being funded by foreign parties, including by Soros, when he had allegedly masterminded plans to bring the country's economy down.

They had also been asked to clarify whether they had received foreign funding to support their political activities.

Former PKR leader Ng Lum Yong had demanded that the trio publicly explain Suaram's funding as the people wanted to understand its true role as an organisation.

"The people have the right to know about Suaram's true political agenda and its motives," Ng said.
In an interview with BH last night, International Movement for a Just World (JUST) president Professor Dr Chandra Muzaffar said NED had been known to lend substantial financial support to NGOs in particular countries like Egypt, Tunisia, Libya and Syria.

He claimed it had been uncovered that such efforts had been going on aggressively over the past five years in the name of democratic freedom with the objective of making people rise up against leaders who were allegedly deemed to be cruel.

He also claimed they handed out assistance with the objective of stirring up the people, and their contribution was akin to udang disebalik batu.

"We know of their activities in several countries as what has happened in the Arab world, leading to the Arab Spring uprising.

"There is also proof they provided assistance to groups opposing leaders in South and Central America at one time with the excuse that the leaders were tyrants and undemocratic.

"Similarly, they were believed to have assisted rebels to oppose Russian President Vladimir Putin."
Chandra, who is also the chairman of 1Malaysia Foundation, said the credibility of such an organisation which claims to support institutions of freedom and democracy was questionable as it could threaten global security.

He added that those behind the body included Zionist groups which maintain good relations with the Jewish government. 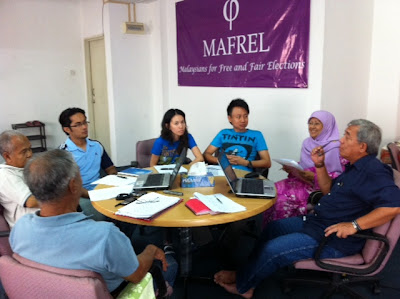 Meet the newcomers: Rick, Vivian and Aizat
Posted by AHLI MAFREL at 8:29 PM No comments: 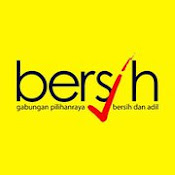 Malaysians for Free and Fair Elections

MAFREL is a non-partisan election observation and monitoring organization formed in 2003. Since its inception, MAFREL has conducted electoral rolls verification programmes to research on the issues of phantom voters and authenticity of the electoral rolls in the states of Kelantan, Terengganu, Selangor and Federal Territory of Kuala Lumpur . MAFREL has also extensive experience in election observation and since December 2005, has conducted extensive election observations in the Pengkalan Pasir, Kelantan by-election (December 2005), the 9th Sarawak State Legislative Assembly Elections (2006), the N.6 Batu Talam by-election (2007), the N.8 Machap by-election (2007), the N.11 Ijok by-election (2007). In March 2008 MAFREL received official accreditation from Suruhanjaya Pilihan Raya Malaysia (SPR) to observe the 12th General Election. MAFREL’s last involvement as accredited observers was in the N.31 Bagan Pinang by-election in October, 2009. MAFREL has also participated in international election observation missions in Sri Lanka, the Philippines, Indonesia, Hong Kong, Afghanistan, Thailand and Bangladesh. 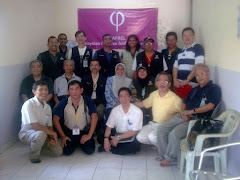